Belgian Deputy Prime Minister and Minister of Finance Vincent Van Peteghem and Dutch State Secretary for Benefits and Customs Aukje de Vries presented the results of drug seizures for the year 2022 in the international ports of Antwerp and Rotterdam at a joint press conference. Both customs services combined seized 160 tonnes of cocaine in 2022.

International drug trafficking and related criminal organisations regularly choose the ports of Rotterdam and Antwerp for their illegal activities. Both ports are centrally located in north-western Europe and also have a long tradition with transport lines from South America due to their international appeal.

Customs services in Belgium and the Netherlands are cooperating intensively in the fight against international drug trafficking. For example, Belgian customs intercepted just under 110 tonnes of cocaine at the port of Antwerp and Dutch customs in turn intercepted 50 tonnes of cocaine at the port of Rotterdam. A joint record and proof that thorough cooperation and information exchange pays off. Both customs services will therefore confidently continue along this path of cooperation. This by strengthening their own expertise in the coming years and continuing to share it among themselves.

For example, there is a regular exchange between Belgium and the Netherlands of strategic decisions, training and information gathered by artificial intelligence, and joint operational actions are also launched on the field.

Both countries will continue to invest in strong customs in the coming years. For Belgium, this includes the recruitment of 108 new staff at the port of Antwerp, the purchase of new scanning equipment and the further roll-out of the 100% risk scanning project. For the Netherlands, investments in the coming years will include artificial intelligence, chemical detection, container tracking and the creation of technical barriers. For every investment, both countries benefit, because together we are strong.

“For international drug criminals, Antwerp and Rotterdam are two gateways to the European mainland. Like two dots next to each other on the map of Europe. Any suspicious movement spotted in Rotterdam or new form of hiding technology discovered in Antwerp can help both ports move forward. Exchange of information and expertise is the beating heart of our cooperation. The new results show that together we can make a fist against international drug trafficking and its impact on our security, our economy and our society. The fight against drugs is a constant priority for customs.”

“The figures show once again how huge the problem of drug smuggling still is, both in Belgium and the Netherlands. The consequences of this criminal drug trade extend far beyond the ports. Criminals are becoming increasingly ruthless and the consequences, such as shootings and murders in the middle of the streets, are being felt in both countries. It is of great importance that our countries stand shoulder to shoulder in tackling undermining. That is why Dutch and Belgian Customs will cooperate even more intensively in the fight against drug smuggling in 2023. Together, we must make a fist to stop the increase in smuggling and the related violence.”

The FPS Chancellery of the Prime Minister uses cookies to ensure the proper functioning of this site.

To improve your visit, we also use optional cookies that you can accept or decline. More information can be found on our "personal data protection" page.

No, I refuse
Yes, I accept
Previous article 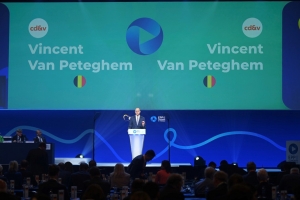